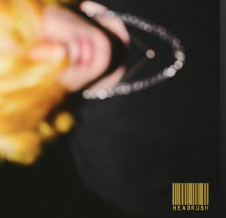 Ah, bands that get way too much hype just to disappoint. I should start a blog.

"HEADRUSH" starts off with an intriguing, dark, percussive intro leading into a cinematic electric piano. This is what this album does well. That vibey, modulated pop melody. Eventually vocals enter, to deliver the most cliched lines playing on today's pop cultural obsession with all things 90's. The line that sticks out the most to me on this tune, "And I guess sometimes I love the thought of dying" is fascinating. I think it's a good line lyrically, but it's far from creative. Today's indie pop flashes often into emo.

The album carries on with many ups and downs. Songs like "Here in My Head" try to achieve a 1975 style vibe, but honestly fall short and seem tacky in the process. Whereas songs like "Honest", "Mean to You", and "Stupid" are executed in an expert way only this group of musicians can pull off. They do an equally good job of innovating, and pulling out beautiful and familiar sounds.

The album reaches the title track in a weird, unexpected spot. I can't determine if it's too early or too late, but it just doesn't flow right to my ears. I honestly can't determine if I like the song or not. It's too inventive to hate it, but too bipolar to settle on an opinion.

The album's final song, "Annalise" is a good cap to an album that is so up and down. It's a balladic take on a culmination of everything they built up to on the record so far. The melody is so unoriginal, but it's the only thing I dislike about this tune. The slow groove sits really well, and the synthetic sax sounds are the highlight of the record.

"HEADRUSH" has moments of impressive dazzle, but it's ultimately nothing more than a sparkler on the 4th of July. It's pretty and all, and somewhat entertaining. But, at the end of the day, there's going to be much more impressive stuff to enjoy.

disclaimer: this record is still totally worth checking out. Just because I didn't like every part of it, doesn't mean you will have the same opinion.

Check out HEADRUSH on Spotify here


Posted by Minnesota Indie at 7:39 PM